Peace Boat Disaster Relief (PBV) responds to disasters in the world in partnership with local organizations based in the countries affected by the disasters as well as international humanitarian agencies. Response plans are carefully designed to best serve the people in the affected communities and implemented in accordance to the international humanitarian guidelines and standards.

In October 2011, the Van province of Turkey was struck by magnitude 7.1 earthquake. PBV launched a fund-raising campaign, sending $3,500 through one of its local partners to assist in rebuilding efforts and help those affected tide through the upcoming winter. 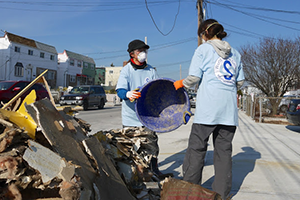 In October 2012, Hurricane Sandy devastated the East Coast of the USA. For over 6 months, PBV and Peace Boat US members worked in the New York City area with a local partner organization, dispatching coordinators and volunteers to assist affected communities. Volunteers were involved in both field and administrative operations, focusing mainly on the management and coordination of local volunteers and collecting and fulfilling the needs of the local residents. This became a symbol of U.S –Japan solidarity and a model of how small teams of experienced volunteers can help boost the capacity of local organizations facing a surge in volunteers following disasters. 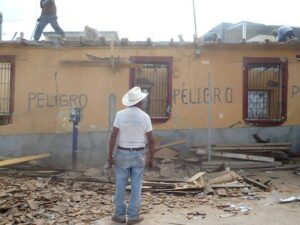 In November 2012, a magnitude 7.4 earthquake struck Guatemala, causing widespread damage and resulting in more than 40 deaths. Despite the severity of the situation, this disaster didn’t not receive much attention from Japanese media. Peace Boat conducted an onboard fundraising campaign to assist those affected, raising $5,299 in total. This sum was sent to a local NGO in Guatemala, CEIBA, which used the funds to repair damaged homes and to assist those in need. 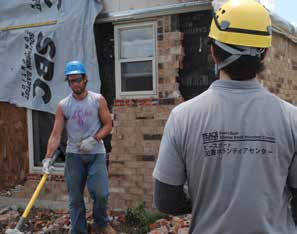 In May 2013, a series of powerful tornadoes ripped through Oklahoma state, claiming many lives and destroying entire neighborhoods. PBV immediately started raising funds to provide assistance. In the following weeks, PBV dispatched a team of experienced staff that collaborated with local community groups and NPOs, assisting in the coordination of volunteers, the removal of debris, and other field operations. PBV also provided financial support to local relief organisations in Moore, Oklahoma. 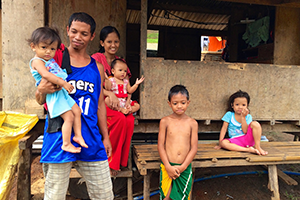 Typhoon Haiyan tore through the Philippines in November 2013, causing widespread devastation. A range of humanitarian actors, including UN agencies, governmental bodies and international NGOs, responded immediately. PBV dispatched experienced staff immediately to conduct field assessments and support coordination of relief efforts with a large number of domestic and international organizations that responded. The sheer scale of the disaster, compounded by the complex geographical landscape and the variety of community needs that arose, made this response a major challenge for all involved. In collaboration with private, civil and government sector groups, PBV provided emergency support to evacuees and assisted in long-term recovery through the distribution of vital supplies to affected communities. Participation in the UN cluster system enabled PBV to gather and share crucial information, and find suitable partner organizations to maximize the impact of operations at the grass-roots level. With the active participation of local stakeholders, PBV and a local partner distributed emergency shelter repair kits and kitchen starter kits to over 1,100 households on Biliran Island.

A year after Typhoon Haiyan devastated parts of the Philippines and resulted in more than 7000 casualties, Typhoon Hagupit led to another wave of damage to the archipelago. In the wake of Typhoon Hagupit, PBV sent emergency funds to local partner organization PDRRN, with whom a strong partnership had been established after Typhoon Haiyan. These funds were used to support the recovery of fishing industries in Busali village, Biliran Islands. 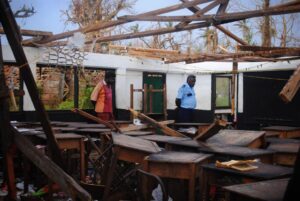 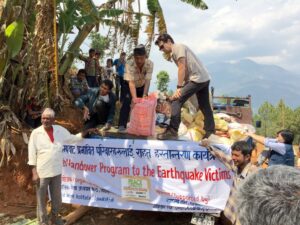 A magnitude 7.8 earthquake struck Nepal on 25 April 2015, resulting in more than 8,800 deaths and 60,000 people having to evacuate to safety. Besides causing landslides and fissures to surface, the tremors also triggered the collapse of many brick buildings. Working with Japanese NGO Shaplaneer and local NGOs like Social Work Institute and Child Workers in Nepal, PBV conducted extensive aid efforts in affected regions. Emergency relief efforts included the distribution of daily necessities and learning kits, building of a temporary school compound as well as the training of disaster volunteer coordinators. The entire operation lasted for around half a year. 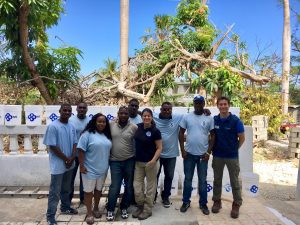 On 4 October 2016, Hurricane Matthew made landfall in Haiti, resulting in more than 1,000 deaths and more than 170,000 people being forced to evacuate. With water and sewage systems affected, access to portable and safe water became a serious problem, leading to a rise in diseases such as cholera and cases of diarrhea.
Working with American NPO World Cares Center and other bodies, PBV commenced its emergency relief operations in Jérémie, the capital of Grand’Anse department. PBV prioritized the provision of sanitary supplies to prevent the further spread of cholera. Working together with local counterparts, PBV then targeted the provision of clean water to affected areas while also educating the local communities about the importance of proper sanitation via workshops. Portable water filters were provided to 744 households, 4 schools, and two medical facilities, while the workshops focused on handwashing techniques using soap and the importance of heating up food before consumption. Through these efforts, it is expected that more than 10,000 people would benefit over a span of a decade, having gained the knowhow to access clean drinking water and how to reduce their risks of getting diseases like cholera. 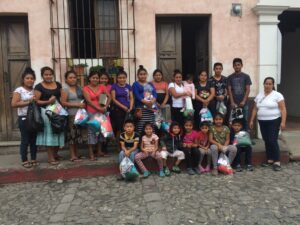 Guatemala’s Volcán de Fuego erupted on 3 June 2018, completing destroying several communities and affecting around 1.7 million people. PBV launched extensive efforts, working with our local partner MINNASAN on many fronts. Counselling and consultation support for children who were orphaned and for parents who had lost their children was provided, while a scholarship was also launched for families who did not have the means to support their children to attend school anymore. Relief supplies like hygiene products, clothes, food, etc. were further provided to assist in the rebuilding of communities and livelihoods.

Related articles:
Updates on Support to Communities affected by the Mt. Fuego Volcanic Eruption in Guatemala 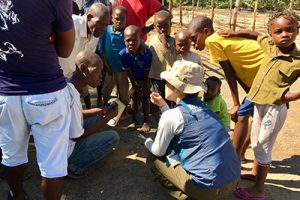 In mid-March 2019, Cyclone Idai struck Mozambique, Malawi, and Zimbabwe. Idai was described as one of the deadliest storm-related disasters to hit the southern hemisphere, with more than 1.5 million people suffering from the destruction it wrought. PBV dispatched two staff members to Beira, Sofala Province, Mozambique, in April to conduct a rapid needs assessment. The dispatched staff attended regular meetings organized by humanitarian agencies and gathered information about ongoing projects to identify the greatest needs in the affected communities, particularly in badly hit rural areas. In Buzi District, Sofala Province, Cyclone Idai had caused widespread flooding, ruining the upcoming harvest. Houses and public infrastructure had also been destroyed. PBV embarked on a project in collaboration with a local NGO, Kulima, to enhance food security in Buzi District. Food kits were distributed to support local communities till the next harvest, while seed kits were also provided to help rebuild their livelihoods.

In late 2019, bushfires in Australia escalated into an unprecedented scale. As covered in the media, the fires burnt down massive areas of the states of New South Wales, Victoria and other areas in the continent, resulting in loss of lives of residents and fire-fighting volunteers, as well as enormous damage to the environment and personal and community properties. PBV put out a call for donations to respond to these deadly bushfires and raised funds from individuals and organizations across Japan. Passengers on the 103rd Peace Boat Voyage also made great contribution to the relief fund. The donations raised during the campaign supported the recovery of first nations communities in Australia via the Fire Relief Fund for First Nations Communities with facilitation by the Australian Communities Foundation.

Related article:
After the bushfires in Australia: PBV’s support to the First Nations communities 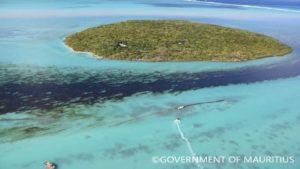 On July 25th, the Wakashio, a cargo ship owned and operated by a Japanese company, ran aground in the Indian Ocean off the coast of Pointe d’Esny in south-eastern Mauritius. The accident caused fuel from the ship to begin leaking out into the surrounding coral reefs on August 6th, resulting in over 1000 tons of oil polluting the nearby waters and coast lines. The Mauritius government has declared a ‘state of environmental emergency.’ PBV launched a 6-months long fund-raising campaign for emergency relief to support the environmental and financial recovery efforts in Mauritius. The donations have supported the activities of the Mauritian Wildlife Fund (MWF) and Environmental Protection and Conservation Organizations (EPCO) working towards nature conservation and economic recovery of fishing communities. More than 8000 individuals and organizations in Japan offered their contribution to the fund to support the initiatives by the two organizations. 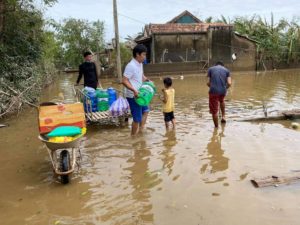 Since early October 2020, nine provinces in central Vietnam experienced torrential rains and seven tropical storms by the end of November. Landslides and floods caused enormous damage to the communities in the region, including loss of more then 240 lives. The United Nations Country Office in Vietnam estimates the disaster affected 7.7 million people and support in every sector, including food, livelihood, health and education, is in urgent need. PBV set us an emergency relief fund to support the Da Nang Youth Union, which has been actively involved in relief projects in and around the city of Da Nang. The fund enabled the Youth Union to deliver food packages to 200 families in extremely difficult economic situations in flooded communities in Da Nang.