In July 2020, M/V Wakashio, a bulk vessel owned and operated by a Japanese company went aground on the south-eastern coast of Mauritius. Ten days later, the ship started spilling oil causing environmental pollution to the sea and coastal areas. The Mauritian government declared a state of environmental emergency and called for support from the international community.

Immediately after hearing the news, Peace Boat Disaster Relief (PBV) started contacting the Mauritius-based NGOs responding to the emergency and launched an emergency fund to support their activities. One of the NGOs which PBV contacted and has been supporting is the Environmental Protection and Conservation Organization (EPCO).

In early July, we had an online conversation with EPCO’s Vice President and Project Leader, Mr. Daksh Beeharry Panray, to look back on their efforts during the last year and learn about their community support projects where they collaborated with PBV. We are sharing the interview in a two-part series, and the second half which will be posted next week!

How did you learn about the Wakashio disaster first? What was the initial reaction of the local residents? 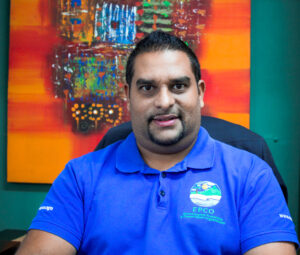 “It all started with posts on Facebook showing a large ship stranded in the reef in Mahebourg, a town on the south-eastern coast of the island. The residents and fishermen in the area were wondering why the ship came so close to the island and the news of the grounding spread through social media much faster than the official announcements from the government. Ten days later, oil spill from the ship was witnessed and reported and the residents were in a panic. Since EPCO had been working on projects to support fishing communities, we received many phone calls from them asking for help to respond to the situation. Right after the oil spill, the residents and NGOs in Mauritius took part in the conservation effort, such as creating oil fences (booms) with locally available materials including their own hair, collecting oil at the shore or from the boats. The news of the oil spill was also shared widely through social media and came to be known internationally. With support from France, Japan and other countries, the government then managed to implement measures for environmental recovery”.

How has the situation changed over the last one year?

“The oil clean-up by the government has been completed and professional fishermen with an official license can now fish even on the south-eastern coast. However, the environment needs to be monitored in order to evaluate the long-term damage caused by oil pollution. EPCO launched a crowdfunding campaign in August to provide immediate and long-term support to the fishing communities and those in the tourism industry. At that time, the number of tourists visiting Mauritius was declining despite the island being COVID-19 free. We imagined that the life of workers in the tourism industry would become even harder because of the oil spill which might lead to a further decline of tourists. Therefore, we made a project plan to offer alternative livelihoods to those affected by the oil spill and pandemic in 17 communities along the south-eastern coast of the island. Due to the rise in infection cases in Mauritius since March 2021, we had to delay the start of the project to comply with the restrictions posed by the government. Gathering in a large group or travelling long distances have not been allowed under the lockdown. By late July, the restrictions are likely to be lifted, and we should be able to start visiting the villages for exhibiting the equipment for alternative livelihoods and organizing the workshops”.

A short video on the project overview created by EPCO is available on the PBV’s YouTube channel (English with Japanese subtitles): visit  https://youtu.be/jMYKzXkqOsk .

In the next half of the interview, Daksh will be talking about the ongoing challenges and development of the project. Stay tuned!