In July 2020, MV Wakashio, a ship owned and operated by Japanese companies, ran aground on a coral reef south east of Mauritius. The heavy oil in the ship started

leaking out to sea on August 6th, 2020 and the ship was broken into two pieces by mid-August. The incident caused enormous damage to the environment and livelihood of the coastal communities.

At the end of August, Peace Boat Disaster Relief (PBV) launched an emergency relief fund and called for donations to support local organizations working for environmental recovery and community reconstruction. As mentioned in our previous post, we have been in touch with the Mauritian Wildlife Foundation (MWF), which has been actively involved in the recovery efforts since the day the oil spill was found. MWF members have carried out evacuation projects of the endangered animals and plants from the affected areas and provided protection to rescued species. The first portion of the donations PBV raised through various charity platforms was donated to MWF in October to support their environmental recovery and conservation programs.

Damage from the oil-spill has not been limited to the environment. The coun 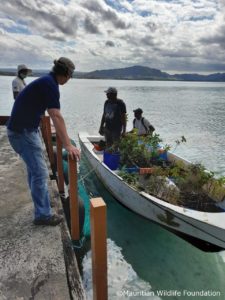 try is a favorite holiday destination for many people around the globe due to the breathtaking beauty of the sea. However, the local economy was struck hard by the COVID-19 pandemic which restricts the entry of tourists.

In addition to the difficult economic situations caused by the virus, the oil spill disaster posed another challenge to the local economy in Mauritius. The pollution heavily hit the communities along the coast as they depend on the sea for their livelihood, such as fishing. While the oil on the surface of the sea was more or less collected, the oil stranded in mangrove bushes on the coast remains as of mid-November. Some estimate it will take two to three decades for the country to fully recover the environment to the pre-disaster conditions. We are now looking to expand our support to the affected communities through another Mauritian NGO, the Environmental Protection and Conservation Organization.

About the recipient organization: Environmental Protection and Conservation Organization (EPCO)

The oil spill has caused damage not only to the environment but also to the people’s lives. People in the villages along the southeastern coast, where the pollution was significant

, are still not allowed to fish or swim in the sea. The community members are left without a source of income and unsure when they can resume fishing in the sea. Considering the challenging situations posed to the villagers, EPCO plans to launch a project to build their capacity to develop alternative livelihoods, such as small-scale aquaculture, sustainable agriculture, agroforestry and animal husbandry.

Your donations will support mid to long-term environmental restoration efforts, biodiversity conservation, and the livelihoods of those affected in the contaminated areas through local NGOs including MWF and EPCO. Please visit our donation page and find out how you can contribute to the recovery efforts in Mauritius.