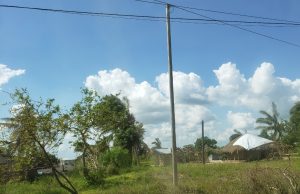 The dispatched PBV members traveled to rural communities outside Beira for further investigation of the damage caused by Cyclone Idai.

The storm first made landfall in Beira then headed inland, moving westward over a plain which rivers run through. The landscape creates favorable conditions for agriculture in ordinary times, but led to extensive flooding during and after the storm. In particular, Buzi District located in the south of Beira experienced severe flooding due to the storm. During the storm, many were rescued from the area by helicopter and boat while witnessing the water lever rising way over head height. In some parts, the water from the storm had yet to recede at the time of our visit. The unique features of the landscape contributed to limited access to the affected communities, on top of the considerable destruction of roads and bridges. 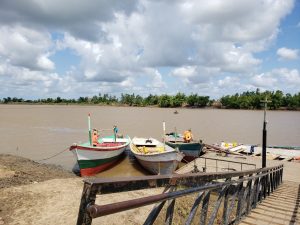 In addition to the geographical features of the region, the storm caused prolonged damage to the area owing to the timing. The storm struck the central provinces of Mozambique in mid-March, when the fields were filled with produce waiting for the harvest. The storm and flooding not only devastated houses but also ruined the agricultural fields, which serve as the main source of nutrition and income for the rural population. The loss of the harvest also amplifies the concern over long-term food and economic stability in the region. Residents lost food crops as well as stored seeds and farming tools. 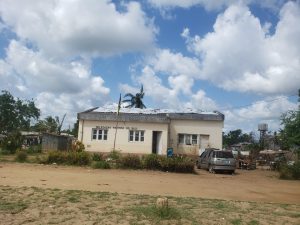 A building in Buzi district. The roof was half destroyed and a watermark showing the flood level remained on the wall.