In order to support community survival until the next harvest, we started distributing food and seed kits in 12 communities in the Buzi District, Sofala Province, in early June. 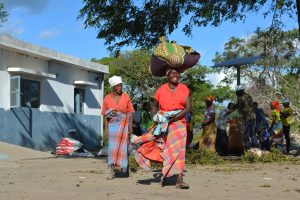 The food kits contain rice and maize flour; both serve as staple foods in the country,  as well as cooking oil and beans, while the seed kits contain vegetable seeds and sweet potato roots for increased food security and nutrition. We aimed to distribute kits to the households in the village with a focus on the most vulnerable.

As mentioned in the previous posts, the communities were located in remote areas with limited transportation. Many roads were still blocked and regular transportation between these villages and towns was not available. The distribution was conducted in six rounds, in order to cover the 12 communities. The villagers came to the distribution points to receive the food and seed kits, and many had to make long trips on foot, by bicycle, or by jumping on a truck that happened to be traveling to the village.

Despite the difficulties, the org 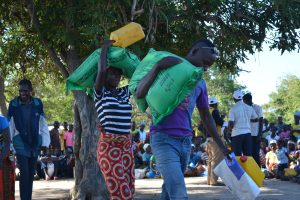 anized operation plan by Kulima made it possible for us to complete delivery of the food kits to 3365 households and seed kits to 1500 of the most vulnerable households in the Buzi district by the 4th July, 2019. In addition to distribution, agriculture training workshops were held for improved productivity and sustainability.

Interim report on the relief project in Mozambique is now available here!

The PBV intends to send staff members to Buzi to monitor and follow-up on the program and meet the further needs for emergency assistance. 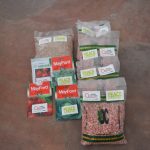