While communicating with multiple thematic clusters of international relief agents gathered in Beira, we tried to identify the locations and programs most in need based on up-to-date information gathered from international and local organizations. In the course of these activities, we came across a member of a local NGO, Kulima. This NGO has been actively involved in social and economic projects since its foundation in the 1980s and fostered strong networks in rural communities across the country. The abundant knowledge and experience of this NGO helped us a great deal while we had limited connections in the country. 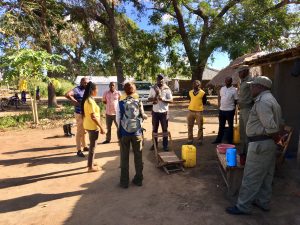 With an emergency grant from a Japan-based international NGO, Japan Platform, we decided to implement a project to contribute to food security in Buzi District, in collaboration with Kulima Beira. As mentioned in the previous post, Buzi District was one of the worst affected areas in Sofala Province. While intensive relief efforts were ongoing in a large part of the district, there were some communities left out of such assistance. The communities we decided to support were among such areas. After consultation with local authorities, we identified a village of around 3000 households in rural part of the district as beneficiaries.

The village is located about 3-4 hours’ drive from Beira, but paved roads disappeared after only a third of the trip and we had no choice but to take bumpy dirt tracks. Sometimes we had to take detours due to the tracks being blocked by fallen trees, and occasionally experienced car breakdowns. However, thanks to the amazing driving skills and help from the people we met on the way, we finally made our way to the village! 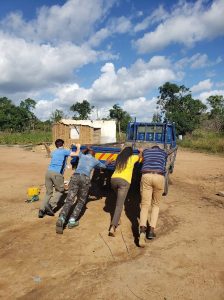 When we first arrived in the village, one of the community workers showed us maize cobs covered in mud and mold. He explained that the villagers lost their food and crops, and the moldy maize was the only food they had after the cyclone swept through and flooded the area. We also learned that we were the first relief agents to arrive in their village. In order to support the communities’ survival until the next harvest, we started distributing food and seed kits in the village in early June. The food kits contain rice and maize flour; both serve as staple food in the country, while the seed kits contain vegetable seeds and sweet potato roots for increased food security and nutrition. We aim to distribute the kits to the households in the village with a focus on the most vulnerable.