As the end of the year is fast approaching, Peace Boat Disaster Relief (PBV) would like to take this opportunity to express our deepest gratitude to our donors, supporters and volunteers who have made great contributions to our activities throughout this year again. Thanks to your generous support, we have managed to continue carrying out disaster relief projects and training programs despite the challenges posed by the pandemic. Thank you very much! Looking back on our international projects this year, PBV successfully implemented various relief projects outside Japan through working alongside local organizations. At the beginning of this year, we continued our fund-raising efforts from last year to support communities […]

As the end of the year is fast approaching, Peace Boat Disaster Relief (PBV) would like to take this opportunity to express our deepest gratitude to our donors, supporters and volunteers who have made great contributions to our activities throughout this year again. Thanks to your generous support, we have managed to continue carrying out disaster relief projects and training programs despite the challenges posed by the pandemic. Thank you very much! Let us look back on this year. Our disaster response team in Chiba continued the project to support communities affected by the typhoons in 2019. This project has grown into a community-wide program to encourage people to develop […]

Shop at KURADASHI Website and Give Back to Communities

Are you planning to throw a party or looking for small gifts for this festive season? Wouldn’t it be great if there was a place where you can save money on your holiday shopping and support non-profits of good causes at the same time? There is one! KURADASHI is a Japanese online shopping site that promotes reduction of food waste and disposal of excess items from companies across Japan. The site offers a diverse range of goods ideal for parties and gifts, from wines, snacks, meat, fruits to fabrics and face masks. Many of the food and beverages are sold at discounted prices because the remaining best-before period is relatively […]

Cyclone Idai struck southern Africa in mid-March, causing devastation across Mozambique, Zimbabwe and Malawi. Despite little international news coverage, the United Nations has described it as “one of the deadliest storms on record in the southern hemisphere”. To date, the disaster has claimed over 1,000 lives and affected more than 3 million people across the region. Tens of thousands of people are displaced and staying in temporary camps, and over 300,000 homes were destroyed. Furthermore, the destruction of critical infrastructure and other impacts have led to the spreading of illnesses such as cholera and malaria. Emergency humanitarian support for survivors is now an urgent task. In response to this crisis, PBV has […] 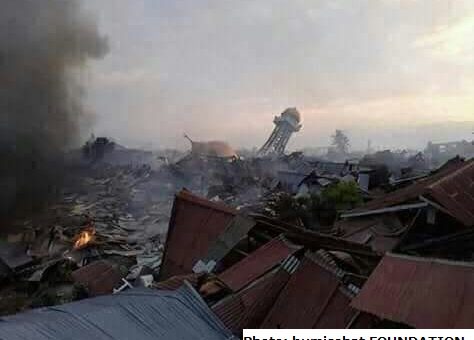 On 28th September, 2018 (Friday), an earthquake with a magnitude of 7.5 struck island of Slawesi, Indonesia. According to an announcement by the Indonesian Government, the earthquake and tsunami caused severe destruction, and over 1,500 people are confirmed to have lost their lives (as of 5th October). Number of people who are left homeless has reached to more than 70,000. The full scale of the earthquake and tsunami’s devastation has yet to be confirmed. We have received reports from the local support groups that many residents are left homeless without access to communication and lifeline, facing a great shortage of daily needs. To respond to the emergency situation, Peace Boat […]

An earthquake measuring 7 (out of 7) on the Japanese seismic intensity scale occurred in the early morning of September 6, 2018, resulting in a large-scale blackout and causing massive damage from landslides and liquefaction. In order to provide support for people and areas affected by the earthquake, Peace Boat Disaster Relief Volunteer Center (PBV) dispatched trained and experienced staff to the affected area on September 8 to carry out an initial disaster assessment, and has been cooperating closely with related groups and relief organizations. Our immediate goal is to be able to quickly provide support for people in the areas affected most by the earthquake—Atsumi, Abira, and Mukawa towns. We […]