On June 12 (Sun), just over three months since the earthquake and tsunami, Peace Boat held an event in Tokyo to reflect upon the relief activities of the past three months and consider next steps. At JICA Global Plaza in Hiroo, around 220 people gathered, including many who had volunteered already and some who were considering taking part in relief efforts in the future. 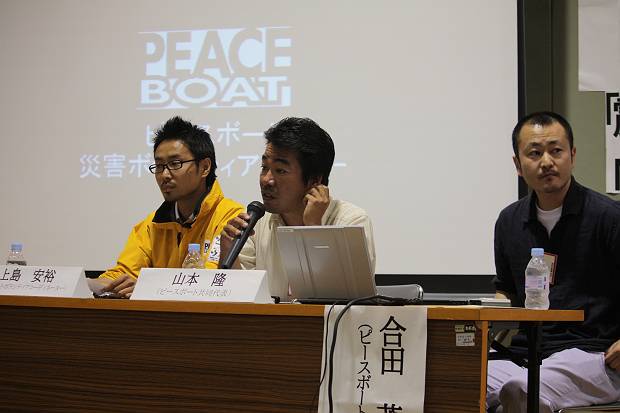 Yamamoto Takashi, Peace Boat Executive Committee member who is leading the relief efforts in the field, first explained Peace Boat’s activities in the past three months.

“The main thing we feel in the field is that there just aren’t enough pairs of hands yet. In the early days after the disaster, in Tokyo many people said that volunteers would just get in the way. However that was not the case in the affected areas. That is why Peace Boat started to send volunteers at an early stage, and create a system to coordinate them. Looking back now three months on, we still believe that was the right decision, and that we have been able to play some kind of a role.”

From April, each week over 100 volunteers gathered. At that time, Adel Suliman, a university student from Libya, was working as the main volunteer coordinator in Ishinomaki, collecting information and coordinating the allocation of jobs and work sites to the volunteers.

According to Adel, “The full time Peace Boat staff were just overwhelmed with telephone calls from morning to night. It was necessary to make sure that they could fully work on other necessary jobs, and so I was able to fulfill the role of coordinating the movements o the volunteers and give instructions on who to go where. When I was in Ishinomaki thankfully there were many volunteers, however unfortunately there were very few students. Since then, I have started to gather a group of university students to encourage more people to take part in the relief efforts.” 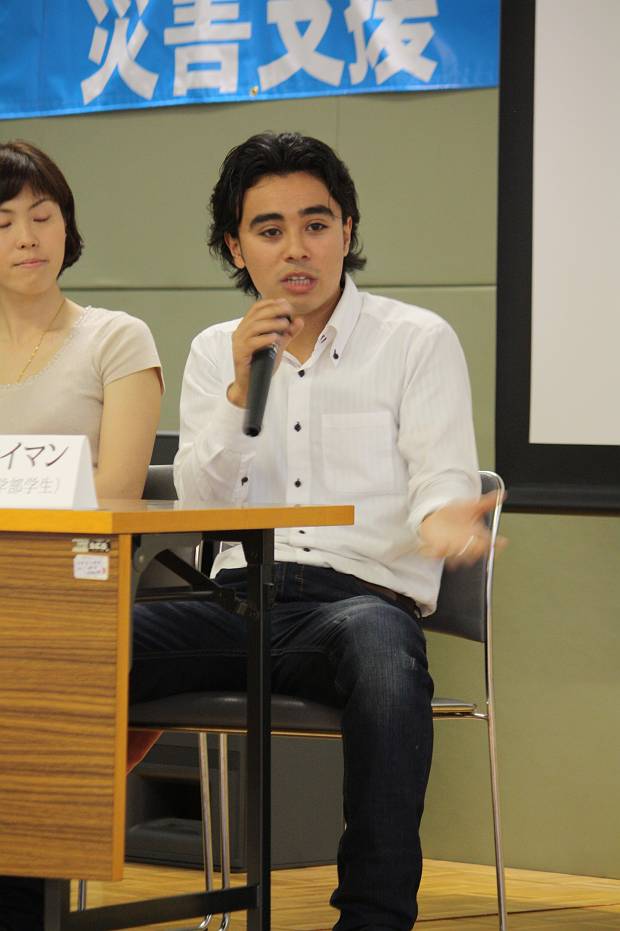 Volunteer Ito Michiyo in charge of coordinating the meal provision activities – an area in which volunteers play a significant role.

“In the evacuation centres, even in late April some people only had rice balls and bread to eat. We hoped to provide hot meals to as many people as possible, as often as possible, and there was a gap between the larger shelters and smaller places in terms of how often hot meals were provided. So, coordination is very important. However, the number of volunteers has been decreasing greatly, and so we are struggling to be able to provide the same number of meals each day. In order to maintain the required number of meals, we need more volunteers to join us.” 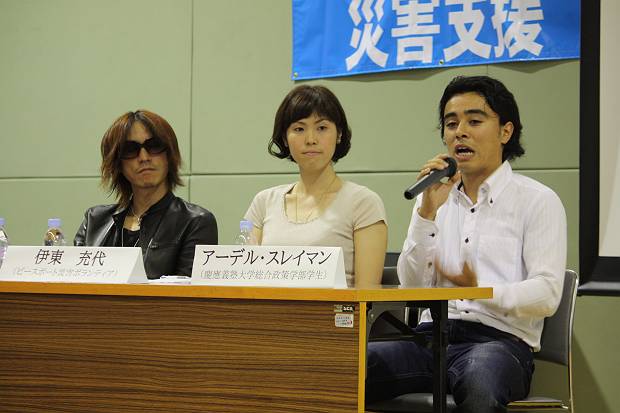 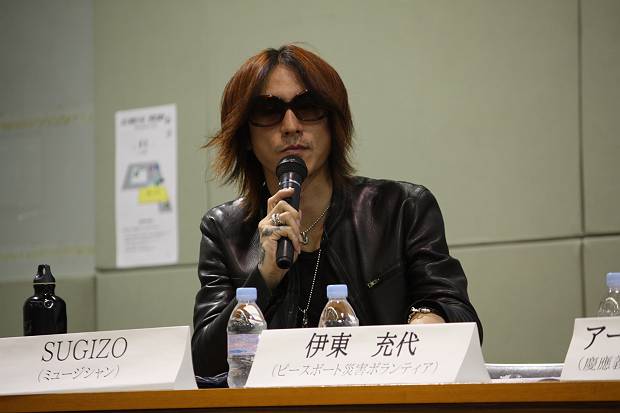 Musician SUGIZO, guitarist of the bands LUNA SEA and X JAPAN, also joined as a regular volunteer to clear mud and debris.

International and corporate volunteers also shared their experiences at the report session. 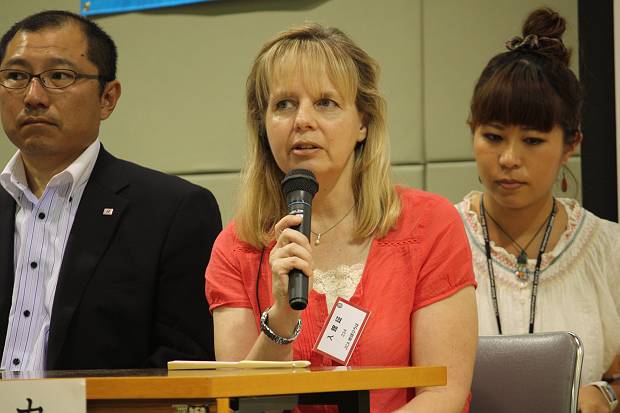 Peace Boat is coordinating many non-Japanese speaking volunteers in the relief efforts, providing linguistic support and opportunities for those even who do not speak Japanese. Karen Sieg was one of these international volunteers, working daily on mud removal and cleaning efforts.

“I felt that I had to do something, and so was seeking somewhere to volunteer. Peace Boat was the organisation that would accept me even without speaking Japanese.” Karen spoke of what led her to volunteer, as well as unforgettable encounters in Ishinomaki.

“We met a lady who ran a kimono shop, which was overrun with mud. She was devastated, and thought of quitting the shop. If she tried to clean it herself, she figured it would take a year until it was useable again. However, the mud cleaning volunteer team worked on her shop, and after a day it was restored to a degree. She told us that this had given her hope again, and that she wanted to reopen her shop. I was so happy to hear that. Often people ask me why I came all the way from overseas to volunteer, but to me, helping people in need is just the obvious thing to do as a human being.” 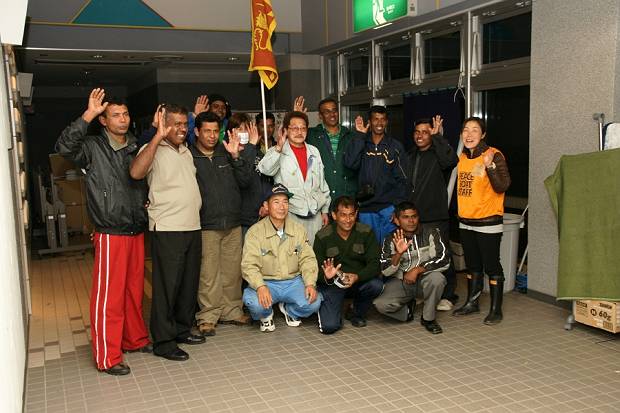 Peace Boat is also working in collaboration with corporations wanting to actively send their employees as relief volunteers. Although having been active in relief activities after the Great Hanshin Awaji Earthquake and the Niigata Earthquake, this is a new initiative for Peace Boat. Bridgestone Corporation and IBM Japan, who both presented at the report session, have been particularly active in sending a great number of volunteers from an early stage to work together with Peace  Boat. 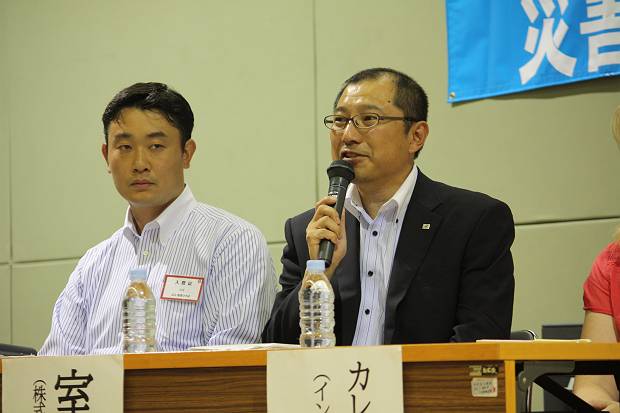 Muroi Takashi of Bridgestone explained that although their company made financial donations to support relief efforts, he was troubled about whether that was enough.

“I felt that we should actually go to the affected areas to volunteer, and so suggested this to the company. At first they were worried, but after the first group went well and it was clear that we would be of use, it was decided to continue to regularly send volunteers until at least November. At first, we called for 120 volunteers, and my mail box almost overflowed with so many people interested. We had 120 people within just the first day and a half. After conducting a survey of the people who had been up to volunteer, the majority of them said that although it was difficult they wanted to volunteer again.”

Matsumoto Muneki of IBM Japan also spoke of their company’s efforts, first calling on members of their American football and rugby teams to volunteer.

“Peace Boat was seeking volunteers for one week periods, however as it is quite difficult for employees to take a whole week off from work, we built our own schedule of 3 night – 4 day segments, and created our own style and system for company members to participate in the relief efforts on a long-term basis. From May 27 until June 11, 80 of the 100 members of the American football and rugby teams volunteered in Ishinomaki. They were mostly doing quite physical labour, and one day they were even able to fill 37 5-tonne trucks with tsunami sludge that they cleared.” 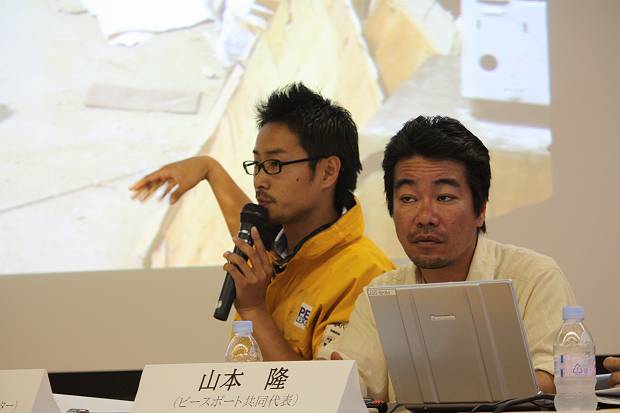 To close the session, Yamamoto Takashi spoke of the outlook of the recovery efforts.

“Three months since the disaster, there are some things which have changed thanks to the efforts of volunteers. However, when we compare this to the situation in Kobe, where after three months things were coming back to normal and so Peace Boat actually wrapped up their relief efforts after that time, things are very different. Of course it can’t be easily compared, but it is clear that the recovery efforts are proceeding very slowly. In this case, it is not as simple as providing temporary housing for the survivors and things being better through that. The difference in this case is that it is not only homes that have been lost, but that many people have lost their jobs and entire livelihoods. That is why it is still difficult to see the finishing line. Nothing has been resolved yet, and there is still mountains of work to do. That is why we must continue to send more and more volunteers.”

It is easy for many people to think that after three months have past some sense of normality must have been restored. However, the efforts of volunteers is still absolutely vital in the affected areas, and cooperation from individuals, organisations and corporations must be strengthened.