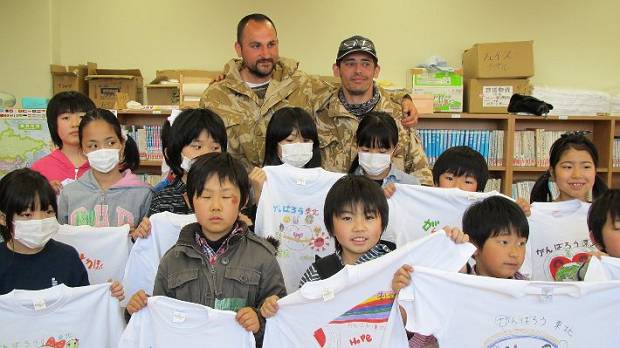 Scott Western Asahina, originally from the UK, volunteered at Ishinomaki with Peace Boat twice – first between April 2-9, and then once again during Golden Week.

During his first time there, Scott’s team of international volunteers – including people from France, Mexico, Germany, the US and Ireland – visited Minato Primary School in Ishinomaki. Through the cooperation of the teachers, the team spent some time with the children teaching English, playing games and drawing pictures.

The situation of the children living in the affected areas, many of whom have no home to return to, have lost many family and friends, and have no safe place to play, is very serious. However, in their drawings, the children showed signs of hope and warmth.

Scott, moved by the meeting with the children and the energy and inspiration they provided, decided to continue to support the children of Minato Primary School through a fundraising project – selling tshirts made with the children’s drawings and the message of “Gambarou, Tohoku” (of the children themselves.

On Children’s Day – May 5 – Scott once again visited Minato Primary School, presenting each of the children with a tshirt featuring their own design. As well as delighting the children, parents and teachers were also moved by this gesture of support.

These tshirts are now available for purchase online, with all funds going to Peace Boat’s relief activities in Ishinomaki. To see a video about the project and Minato Primary School, as well as to buy a tshirt, visit Scott’s web site here: Gambarou Tohoku