When was the last time you spent the night under canvas?

After Typhoons Faxai and Hagibis in September and October 2019, residents remain in need of help. Many still spend ni 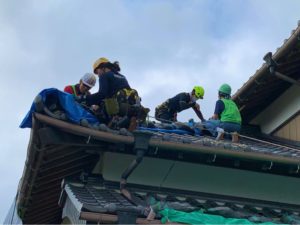 ghts under damaged roofs in southern Chiba, waiting for repairs by professional carpenters.

Peace Boat Disaster Relief (PBV) co-hosted training workshops for local volunteers along with our partners at the Southern Chiba Disaster Relief Center. During the one-day training, participants learned key roofing safety measures, methods to cover the damaged roofs with tarpaulins, as well as how to support work on ground. Each workshop limits the number of participants to allow full attention to safety control among the volunteers. By the end of July, five workshops were held and twenty-four have completed the training. 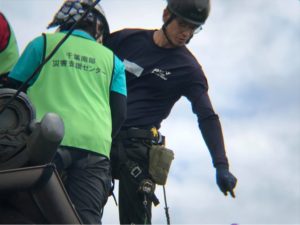 ur training aims to accelerate the temporary repair work of the damaged Chiba houses before the major typhoon season starts, while strengthening the knowledge and skills of local volunteers. Despite Chiba prefecture being located just next to Tokyo with over 6 million residents, the affected area is experiencing a declining and ageing population. Specifically, in Kyonan-machi, a community where the PBV team had offered support since the typhoons, the ratio of elderly residents is the highest in the prefecture. It’s imperative that local volunteers be trained, as the existing capacity of the communities on emergency response is limited.

Amidst COVID-19, the importance of local initiatives in disaster response has been growing. Because of the fear of the spread of the virus to t

he disaster affected areas, Japan Voluntary Organizations Active in Disaster (JVOAD) has advised relief organizations and individual volunteers to carry out projects contained regionally in their Emergency Response Guideline (published in June 2020).  The project in Chiba has been redesigned and carried out with respect to the guideline. Although the pandemic was an unexpected event for us all, we believe improving abilities to manage local emergencies and developing disaster preparedness will be a great asset for the communities in a long run.

The on-the-job training sessions in southern Chiba have been organized with support from Japan Platform and a US-based organization, Center for Disaster Philanthropy.