“The Japan Soccer Legend Players Club” (a welfare organization consisting of well-known Japanese soccer players) is collaborating with Peace Boat for a goodwill soccer event to be held in Ishinomaki.

This coming Saturday  (May 21) the two groups will invite 50 junior high school students from Ishinomaki to participate in this soccer clinic. The Chair of the Legend Players Club, Kaneda Nobuyoshi, will be present to show the Club’s solidarity with the people of Ishinomaki and its support for Peace Boat’s relief activities. 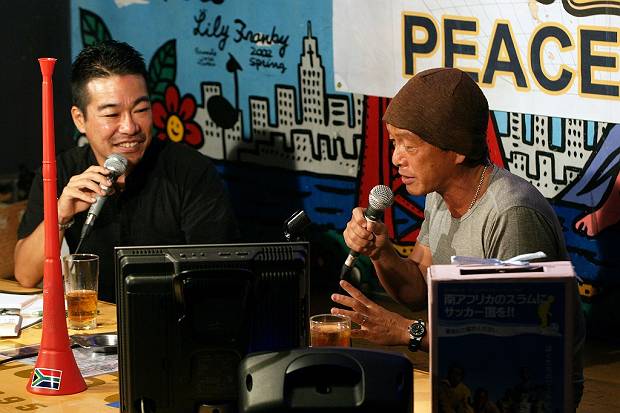 Many schools have re-opened in Ishinomaki now, however after-school sport clubs are not operational yet. Physical exertion is essential for a healthy body and mind, especially for children in such a difficult situation. Peace Boat especially felt the pressing need to carry out events such as this for the local children.

The idea was brought forth by Peace Boat staff member (and one of the founders of  ‘Peace Ball‘ – Peace Boat’s own international charity goodwill soccer project) Yamamoto Takashi.

Yamamoto (40) has been based at Ishinomaki since just after the quake, and said that “we wanted to share the joy of soccer with the local kids”. His idea was presented to the local Soccer Association and the Japan Soccer Legend Players Club, and thus the collaborative effort was born. The event is also sponsored by Japanese sportswear maker ‘Lotto Japan’, and Peace Ball will donate a soccer ball to each participating child.