This is a report by Campe-sino who went to Ishinomaki, Miyagi Prefecture as a volunteer twice, for 9 days from March 21 – 30, and for 8 days  from April 15 – 23. We have obtained his permission to reprint.

I first participated in the disaster relief volunteer activities in Ishinomaki, Miyagi Prefecture, from April 15-23, and for the second time between March 21 -30. 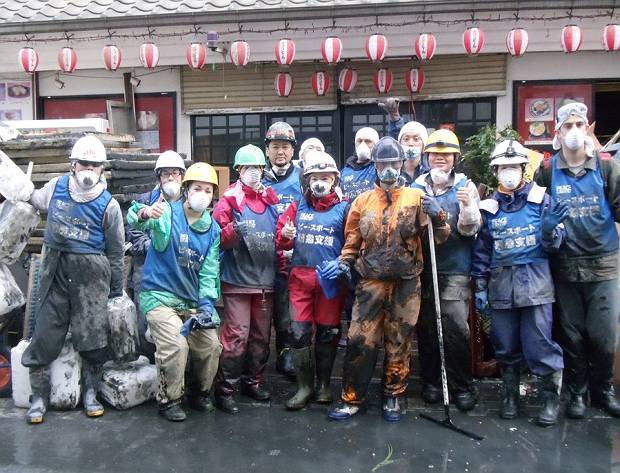 My role this second time was to coordinate a team of non-Japanese who were participating in Peace Boat’s large-scale volunteer programme for disaster relief. My team had eight members including four Australians, two from the UK, one Canadian and a French person who joined in Ishinomaki. They were four females and four males. All of them have been working in Japan (one of them, from Scotland, is visiting a relative for a half year since February). There were also people who came all the way from Canada, Belgium and Norway to assist disaster relief in another team.

The task of both non-Japanese teams was basically to remove mud and rubble. 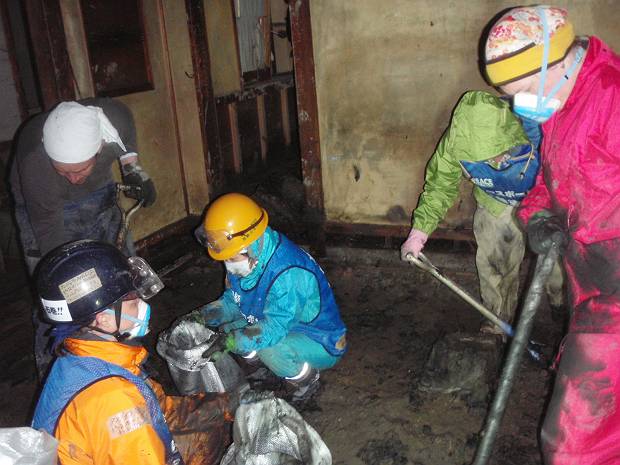 Mud and rubble clearing
Ishinomaki’s central commercial area was inundated up to two metres by the recent tsunami. Furniture, shop shelves and products were covered with mud and scattered around the ground and corridors where black sludge was piled up. The local people and Peace Boat discussed and decided to allocate teams of volunteers to clean the area intensively in order to give hope and life back to the local people by recovering even a part of the central commercial area. We, the non-Japanese teams, also joined to help. 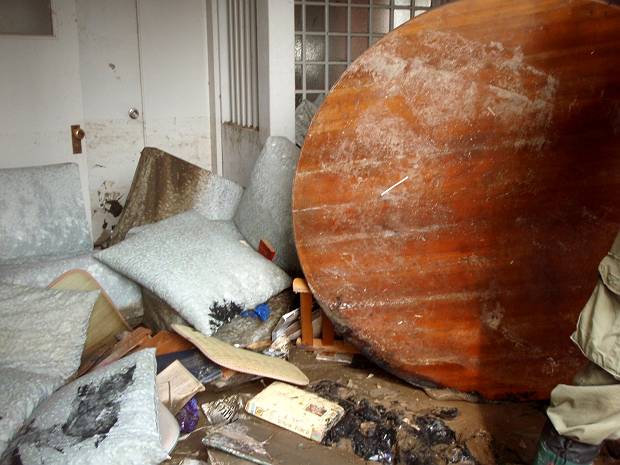 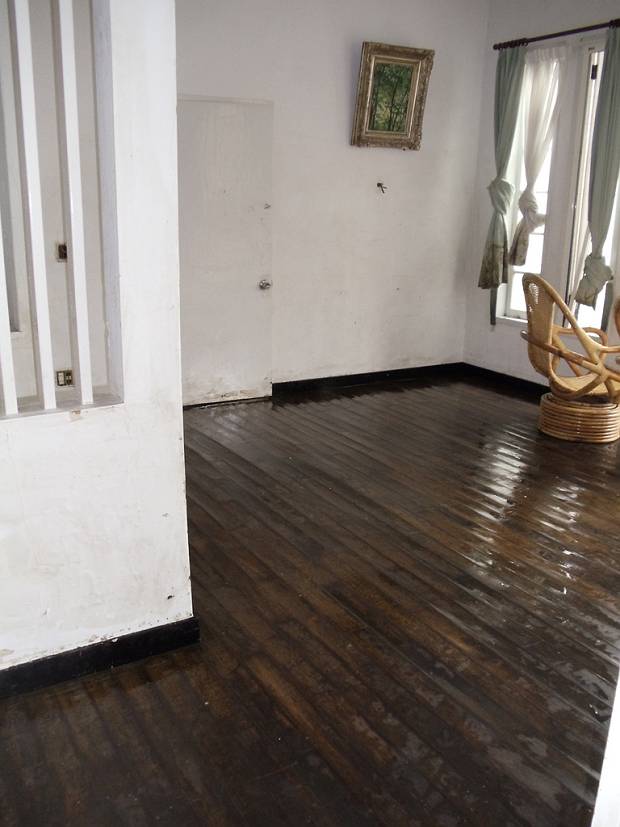 We removed mud and rubble, then carried water from the river to rinse the floor. The work was physically intense and also dangerous, but we could see a clear difference in the buildings before and after our work. Moreover, the house owners  were delighted and truly appreciated our work. It seemed that the local people were specially impressed to see foreigners working on their areas, when even most of the Japanese volunteers are not personally related to the area. I was moved by their dedication.

In one of the houses, where we were asked to stop by after work, they served us tea and snacks in a room that had been cleaned up. 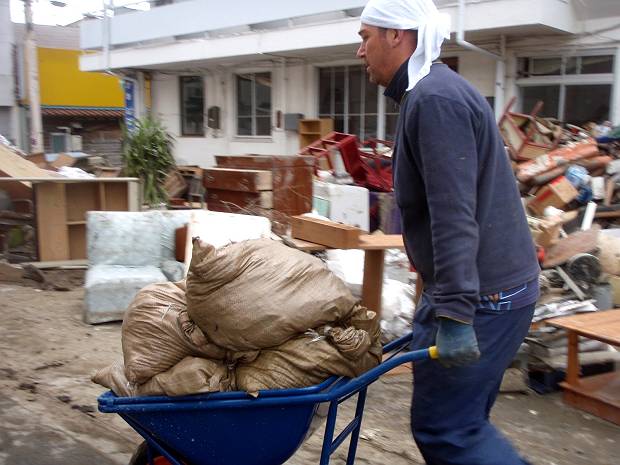 Hard-working team members
I was often impressed by my team members. They kept working and working, shoveling sludge into sandbags, carrying the heavy sandbags out, removing rubble and rubbish. As a leader, I tried to take a break here and there for everyone’s health and safety, but they kept working as if they didn’t want to waste a minute. To be honest, it was a little bit difficult for me being the only 40-something year old amongst such young energetic members.

Base camp in snow
Ishinomaki was a little bit warmer than March when I first went there, but it was still quite cold in the evenings. And there was a big wet snowfall on the third night, with snow crushing the tents that volunteers had set up.  (The university building was opened up for the volunteers to sleep that night.) 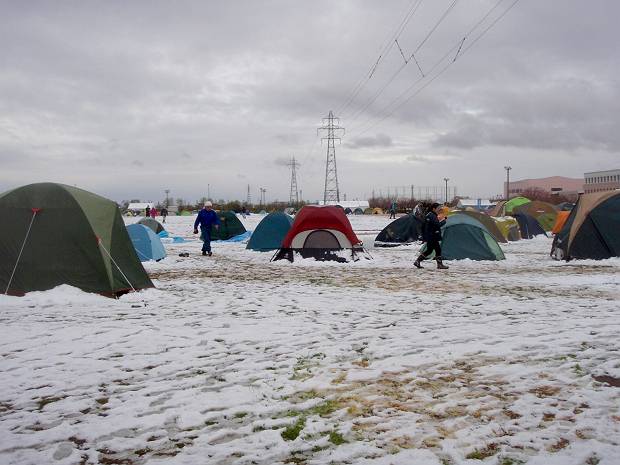 Dear my team members, Thank you all! I could stay motivated and make achievements thanks to the great teamwork during the relief efforts and the enjoyable moments together. I hope to stay in touch with you. 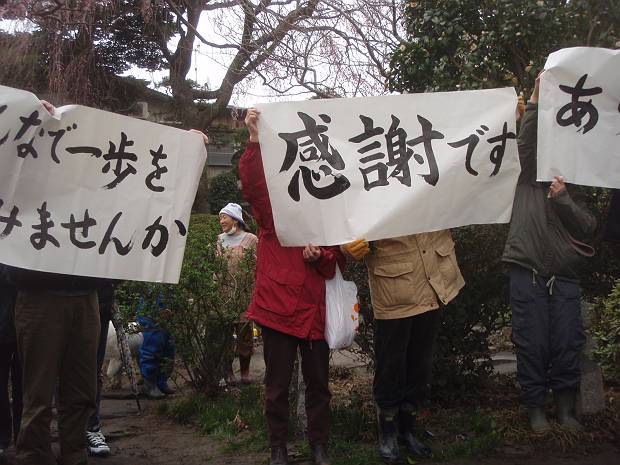 Individuals’ self-help and mutual support within the local communities are of course essential in the affected areas, but activities like the mud clearing that we did cannot be carried out without volunteers’ support. Volunteer activities will be needed for the long term, moving from emergency relief support to recovery support.

Support physically on site is important, but just as important is financial support for the affected people and areas, as well as for the people who are going to work on the site. The most important point is to not forget about the people in the affected areas. What you can do is to go there yourself or support your friends to go there.

The above is an excerpt of of a blog by Campe-sino, reprinted and translated.
Read the original blog in Japanese here.

Volunteers in the affected areas will continue to be needed after Golden Week.
Please attend an information session if you are interested.