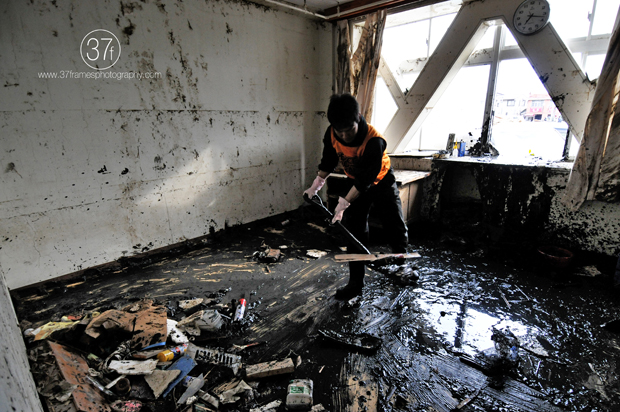 On April 10, Peace Boat held a seminar at the Tokyo Gaien Campus of the Kyoto Zokei Geijutsu University. The content of the seminar was reports and testimonials from the first batch of volunteers who have now returned to Tokyo.

Visitors to the seminar were volunteers helping out in Tokyo, and other members of the public who have been following our twitter feeds and website updates as well as friends and family of the participants. Also, former passengers of Peace Boats’ global voyages were in attendance, along with a large media presence showing keen interest in our activities.

Content was divided into Peace Boats’ past relief efforts both domestic and overseas, as well as reports from how things are in Ishinomaki currently. The one and half hour session was filled with very relevant content.

The Japanese Ministry of Education has recently announced its intention to give university credit for students who participate in volunteer work. To illustrate the significance and importance of this potential turning point in Japanese educational history, we chose 6 young volunteer members from the first dispatch group to share with us their experiences.

First, we had Kawagishi Junko, who is a professional dancer. She works as an instructor in a dance school located just a few minutes away from the Peace Boat Center in Tokyo. She found Peace Boat’s activities via twitter. Despite a lot fear and apprehension, all the news footage she saw of the devastation in the Tohoku region gave her the courage to join in and ‘do it’. Her main scope of work in Ishinomaki was food delivery. With her natural charm and vivacious personality she instantly became very popular locally, especially at the Eiganji temple, which was the main evacuation center she was delivering to. “I felt it was my responsibility as a volunteer to be cheerful and buoyant at all times, otherwise it would be rude to the victims of the disaster” she says.  She started every day with group morning stretching exercises at the Senshu University campus. After her return, she has taken it onto herself to spread the message about the significance of volunteering. She has been interviewed by a number of dance-related magazines and has shared her experiences in Ishinomaki publicly.

Tanaka Daiki is a chef in training in an exclusive traditional Japanese restaurant in the high-end district of Akasaka in Tokyo. His superiors at the restaurant told him to “make delicious meals for all those who have suffered”. He helped out wherever necessary (such as mud and debris removal) – however, being a trained chef, his talents were utilized in our soup kitchen. Having to prepare meals for 500 people, outdoors without any running water or proper equipment proved to be a steep learning curve for him! He was given a drawing from the kids in Ishinomaki as a gift. He now has this framed, and kindly shared it with the audience.

Saza Shinsuke is a university student. Like many others, he found out about Peace Boat’s relief efforts via twitter.  He helped out with providing meals, mud removal and relief goods delivery during the week he was there. He also helped to make the crepes for desert at the Minato Primary Schools’ graduation ceremony featured earlier on this page.
He was making crepes in the classroom next to the one where the graduation ceremony was taking place. He says that he could hear the children crying… Mr Saza will be joining us on another volunteer mission from the 23rd of this month.

Fukushi Eri (known to her friends as ‘Fuku-chan’) was a participant on the 33rd Peace Boat Global Voyage. She is now a Japanese language teacher, and she was able to afford some time to volunteer as the start of her new job has been delayed by the quake. She was helping out in inventory keeping in the storage space of relief goods. It is definitely backstage work, with not much opportunity to mingle with others. On top of this, it is hard physical labour. As she was inside the storage space almost every day and night, she was not able to witness directly the activities going on outside. However, she was able to gleam a sense of what was happening by the changes in the variety of items she had to provide to the outside team day by day. She said it was the first time in her life she came face to face with the significance of ‘quality’ in relief goods – especially clothes. Donated clothes were a mixed bag of newer and well maintained clothes and others not so. Being in the thick of things in the disaster stricken area, and (she herself too) not being able to bathe for days, was always overwhelmed with a sense of wanting to provide only the nicest and best maintained clothes to the victims.

Koyama Daishi, university student and professional lifeguard. He is also a part-time carer.  “I felt that I could be of some use,” he says about his motivation to become a volunteer. He carried out a lot of delivery work to families stranded in their homes. Therefore he had witnessed first hand a lot of the devastation. Exploded sewer pipes, dead and rotting fish and marine life strewn across dry land, the stench caused by the mud and debris which covers the area…
“It opened my eyes, in a way I didn’t think possible” he says. He stated his interest in travelling the world by Peace Boat in the future.

Kamoshida Jun was also a former Peace Boat participant and volunteer, now a high-school teacher. He also learned of Peace Boat’s disaster relief activites via twitter. He mainly helped out with mud and debris removal. During his stay he worked on 3 houses. He mentioned that the tatami mats (traditional Japanese straw carpeting) which had soaked up water and mud were incredibly heavy.  Having to carry mat after mat was very strenuous physical labour.

Perhaps the most trying trying time was when he was removing mud from a young married couple’s home.  There were many children’s books and toys…but no sight of any child. The young wife and husband were silent in their grief.  “Picking up memento after memento of a child no longer of this world. I still cannot comprehend these feelings that swept through me. Howver, I am glad that I volunteered.”

Goda Shigehiro of Peace Boat says, “I learned about the powerlessness of humans in the face of natural disaster. However, I also learned that those who have survived are able to help each other. There are many strong and physically fit people here in Ishinomaki. However there is not enough. Mud and debris removal will still have to go on for months. We still need more people”

Next up on the microphone was director of Peace Boat, Yoshioka Tatsuya.  “There is a significance and effectiveness to volunteers from civil society to help out in disaster relief. It should not be solely the domain of government, specialized organizations or large-scale NGOs only. I would like to share this story with you from one of our staff members here. He was helping out with mud and debris removal in a house where a mother sat alone. Her husband and children all swept away by the tsunami.  Picking out the items he was retrieving, he would hand them to the mother, thinking that she would of course want to keep it. She kept refusing, and asked him to dispose of it all. He came across an old photo album, and once again handed it over to the mother. Even this, she refused to take, and asked him to dispose of it. Is it a way of coping with the pain? Who will ever know unless it happened to you directly? The logic that he applied to the situation (as an outsider) was at odds with what the mother felt or wanted. What would YOU do in this situation? I have absolutely no idea. Maybe there is no answer. Once again, I was left thinking about the significance of volunteering in disaster stricken areas. It may be easy to bring in a bulldozer to an already flattened area to just ‘clear’ all the debris and objects. However, it is not merely ‘debris’ – it is the remnants of personal belongings. The every day items of every person. Perhaps herein lies the significance. The significance for people to go, and to reach out. To share the problems together. Thank you very much for joining today.”