The Peace Boat Disaster Relief Volunteer Center has been working in Kurashiki, Okayama Prefecture, to provide support to the local residents affected by the flooding last July.

For the last seven months, in Kurashiki, over 400 volunteers have participated and offered a helping hand in a wide range of relief efforts, from hot meal distribution and evacuation shelter operation at the earlier phase after the disaster to house cleaning, community building, and, more recently, photo-cleaning. At the PBV, we respect and value the importance of diversity and inclusion, and have worked with many volunteers with diverse backgrounds over the course of our activities in Kurashiki. Volunteers not only come from Japan, but also from other parts of the world, such as Canada, China, the U.S., Spain, France, Italy, and New Zealand. This week, as part of a series, we would like to introduce some of the volunteers who joined our team in Kurashiki recently.

———–
James was a part of the PBV Kurashiki project cleaning team often assigned with removing severely damaged walls and floors from homes that had been submerged in the July 2018 flood waters some up to the second floors for several days. He often mentions how the thoughtful 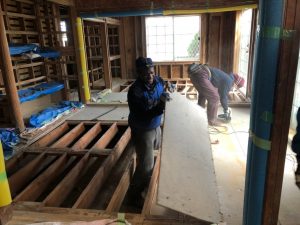 caring local residents of devastated towns like Kurashiki have been his greatest inspiration to the volunteer.
Originally from the U.S., he has been in Japan for more than a decade, teaching English in Tokyo. This was the second time for him to participate in the relief activities organizedby the PBV but he has a great deal of experience in volunteering both in the U.S. and in Japan since he was a teenager. He first started volunteering as a student for a one-day program organized by his school, then thought “Why do we do this only for one day? Those people are still out there & can still use our help. “ This notion was instilled in James growing up in a home where his grandmother & parents were always active in organizing church Soup Kitchens.
Since then, he has been involved in many projects and his passion to offer a helping hand to others brought him to the devastated Tohoku area after the Great East Japan Earthquake and Tsunami in 2011. He took part as an individual volunteer 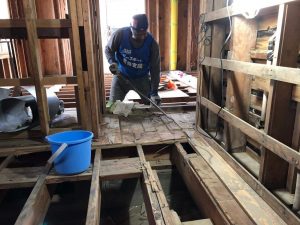 in cleaning mud and debris from the tsunami-stricken areas in Ishinomaki, where he first came across hundreds of the PBV members camping out on the football field at Ishinomaki Senshu University. Since then, he has been connected to the Tohoku region, and still makes regular visits to Minami-Sanriku with a group of children from an orphanage he supports.
He first joined the PBV’s relief efforts in Kurashiki last autumn & was thankful to be able to return again at the end of winter. He says, ” if someone has a sincere willingness to help others, they will find a way. The end result is very simple…they will meet an abundance of people with beautiful
hearts “.