The Peace Boat Disaster Relief Volunteer Center has been working in Kurashiki, Okayama Prefecture, to provide support to the local residents affected by the flooding last July.

For the last seven months, in Kurashiki, over 400 volunteers hav e participated and offered a helping hand in a wide range of relief efforts with PBV, from hot meal distribution and evacuation shelter operation at the earlier phase after the disaster to house cleaning, community building, and, more recently, photo-cleaning. As part of a series, we would like to introduce some of the volunteers who joined our team in Kurashiki recently. Today, we are introducing Harshil from New Zealand.

———–
With extra days to spare after traveling to major cities in Japan with his family, a young traveler headed to Kurashiki to volunteer with the PBV.
Harshil, a university student from New Zealand, decided to contribute his time in Japan to work with the PBV before flying back home. This was the first time for him to travel to Japan and also to take part in the disaster relief project. He first contacted the PBV when he was planning a trip to Japan with his cousin and brother and considered adding volunteering experience to h 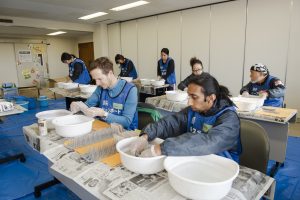 is itinerary.
On the first day with the PBV, he engaged in a photo-cleaning project held in a local authority building in the Tamashima area of Kurashiki. Thousands of photos were damaged by muddy water from the flooding last summer. The local residents handed these precious pieces of their memories of their lives in Mabicho to the local volunteer group working on photo-salvage. The cleaning and drying of the photos need to be done in a timely and careful manner to avoid further damage, and this requires help from many people. Harshil spent the full day cleaning dozens of photos with great concentration and patience. Some members working in the building visited us during the cleaning and were impressed to find that he is from New Zealand and traveled to Kurashiki to help out with the project. At the end of the day’s project, Harshil was offered a surprise gift of locally produced specialties by them!
On his second day, he joined PBV’s house preservation team, which works in houses damaged by the flooding. More than seven months after the disaster, many residents are now waiting for their houses to be cleaned to facilitate the renovation. Harshil worked with other volunteers to remove the damaged building materials and clean the house of a local resident. His work was done carefully and accurately and contributed to the progress of the cleaning project on the house. During the two days of volunteering in Kurashiki, he also had a chance to visit Entsuji Temple, a historical temple with a thatched roof, the likes of which cannot be found in large cities in Japan.

After flying back to his home town, he kindly sent us positive feedback on his experience in Kurashiki. We would like to share his message in the hope to encourage those who are considering to take part in volunteering in Japan in the future:
“Though brief, my time in Kurashiki was great! It was firstly a very different place compared to the other more common tourist destinations in Japan, and of course I had the opportunity to volunteer with PBV. Upon first dealing with them, I was struck by their service and hospitality – they made it so easy for me to join the cause. Apart from helping 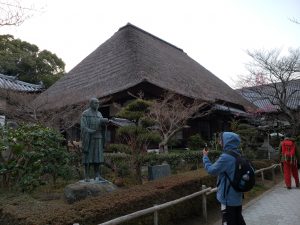 those in need, I really enjoyed meeting the different people from different backgrounds that all came to help. I felt I was able to get a better insight into Japanese people and culture too, and having an interpreter really facilitated this opportunity. In terms of the actual projects themselves, I was quite surprised but pleased to learn of the range of projects that PBV are involved with, and that I was involved with – from cleaning photo albums to actually working in a flood-damaged home. I also learnt a lot just by helping out, e.g. how to clean and take care of damaged photos to the extent of the flood damage, the process for rebuilding and recovering, and the strength of those that the floods have affected.
Volunteering allowed me to really experience Japan in a unique way! I would thoroughly recommend others to join PBV if you’re looking for an opportunity to volunteer and help those who need it, and if you’re looking for a bit more of a meaningful trip, or perhaps just want to try something different.”