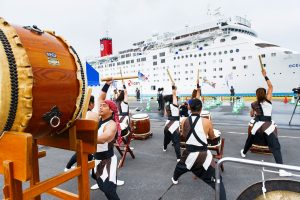 The ship was warmly welcomed by local people with fishing boat flags and Kurofune taiko drums from Date, Ogatsu-cho, as it entered the industrial port of Ishinomaki.

The ship with 1100 passengers slowly approached the shore, while members of the city of Ishinomaki, Onagawa-cho, the city of Higashi-Matsushima, Matsushima-cho and the city of Osaki set up their booths with their local specialities on the quay. These local authorities in the Miyagi prefecture are promoting their regions to attract cruise ships. Mascots from the region and a local hero of Ishinomaki, Sea Jetter Kaito, welcomed the passengers as they disembarked from the ship. 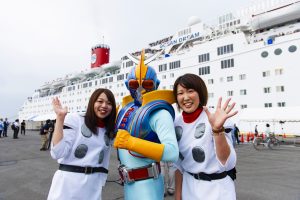 During the call to Ishinomaki, three onboard programs were organized; open ship day which attracted over 400 people from the local areas, a special stage performance of Ishonamaki ni Ita Jikan (the time we spent in Ishinomaki), and a mini-recital by Mr. Ryo Yoshimata of “Akiko’s piano struck by atomic bomb”.

The play “Ishinomaki ni Ita Jikan” is a stage play written and produced by Katsushige Fukushima, themed on disaster relief volunteers in Ishinomaki after the 2011 Great East Japan Earthquake and Tsunami. It has been performed in 30 locations in Japan since 2011. 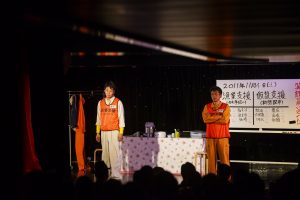 The actors, Katsushige Fukushima, Yoshinobu Ishikura and Tomoya Taguchi had individually joined the relief activities in Ishinomaki at the time and have visited the city from time to time since then. The stage play on the ship was enjoyed by audiences of both those who were watching it for the first time and those who had seen it many times already. The play was strewn with scenes that made the audience chuckle, but at the same time there were touching scenes. The audience were nearly in tears at the words describing the struggles the volunteers had undergone during the relief efforts, asking themselves, what kind of support should we provide? Until when? To whom? The play was concluded with a live performance of a song, “Soyumi”, composed for this play by Ryo Yoshimata. 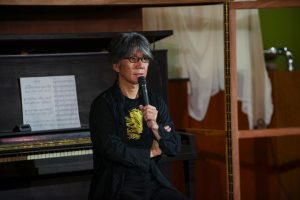 More than eight years have passed since the disaster. There may be things that have changed, and those that have remained unchanged. The thoughts and feeling that arose after the stage performance varied from person to person. It was memorable to see that many members of the audience remained in the hall and talked to the actors after the performance.

A Voyage for Music and Peace was one of the themes of this East Asia Voyage, and the ship called to Hiroshima and Nagasaki on August 6 and 9 respectively. “Akiko’s piano struck by atomic bomb” was loaded to the ship in Hiroshima and had been played at the concerts held in ports of call and onboard during the voyage. The piano was originally owned and played by Ms. Akiko Kawamoto who was born in the US and died from the atomic bomb in Hiroshima when she was 19.

In Ishinomaki, the piano was played at a mini recital onboard by Mr. Ryo Yoshimata, who is known for his extensive work for TV dramas and film soundtracks. The audience indulged in the sounds of the piano while enjoying the stories of Mr. Yoshimata and the piano.

The occasion gave us precious time to reflect on how we remember and pass down the experience of the atomic bomb and the disaster.