Two years have passed since March 11, 2013. The city of Ishinomaki began a campaign to commemorate March 9 as a day of gratitude (as the pronounciation for 3 (San) and 9 (Kyu) in Japanese sounds like “thank you”).

The “3-9 Letter Campaign” initiated by the local community is an opportunity to thank all of the volunteers who came to help after the earthquake, and all the people who have visited Ishinomaki for travel or to attend events. A letter from a person you met in Ishinomaki may come to you too.

The official headquarters for this campaign is being run by the newly opened portal site is-maki.com, which aims to facilitate interaction between the local community of Ishinomaki and visitors to the area. This creates opportunities for those who have participated in disaster relief volunteering to continueto be engaged with the city more through making friends, learning, and simply enjoying themselves in Ishinomaki.

There are many people in Ishinomaki who have been wanting to express their gratitude to the volunteers that cleaned their homes or brought them food, but many people did not have the time to ask the volunteers their addresses. These “3-9 letters” that cannot be sent to any specific address can be viewed on the “巻.com” billboard.

We hope that all who took part in the disaster relief volunteer work through Peace Boat takes a look at this billboard to see letters from people you may have met in Ishinomaki.

Here is the first letter sent, from Ishinomaki Mayor Kameyama Hiroshi (video in Japanese, translation below).

“We have lost everything to the earthquake, but we have not lost everyone’s heartfelt passion towards Ishinomaki. Struck by the terror of the tsunami that left a scourge on the victims, the people of Ishinomaki have overcome much to keep on walking towards a restored future, step by step. We are grateful to the people who lent us a hand in the time of need. We however understand that it is going to take much more time and hardship to truly recover. Even after suffering the blow of the earthquake and tsunami, the people opened their hearts even more to people, and fully supported the notion to accept volunteers. It was when the victims faced a terror never seen before that the untapped warmth of the heart came out from the people here in Northeast Japan, a trait that they may have had from long ago. Cherishing this warmth we now again have, we hope to make Ishinomaki an even better place than before, bringing the local people together, and being gracious to the kindness of the people supporting one another.” 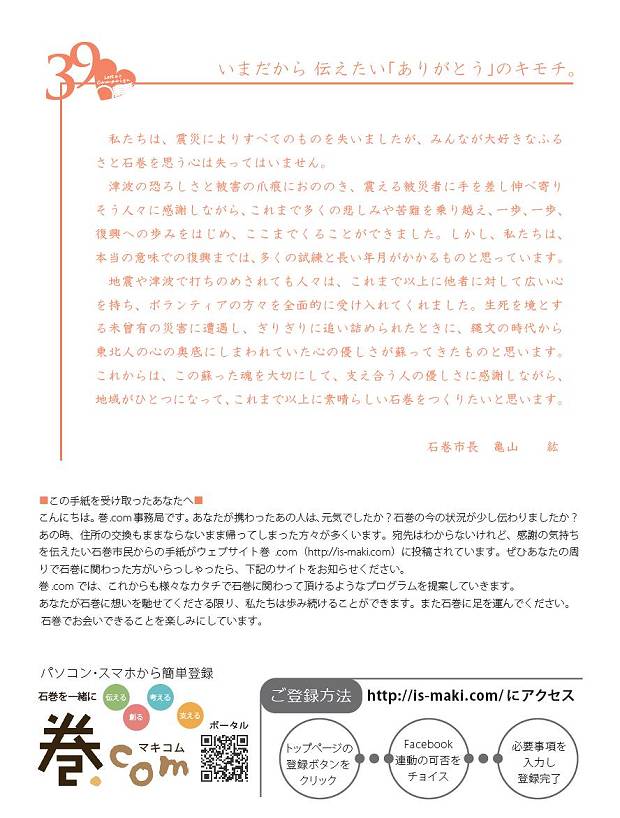